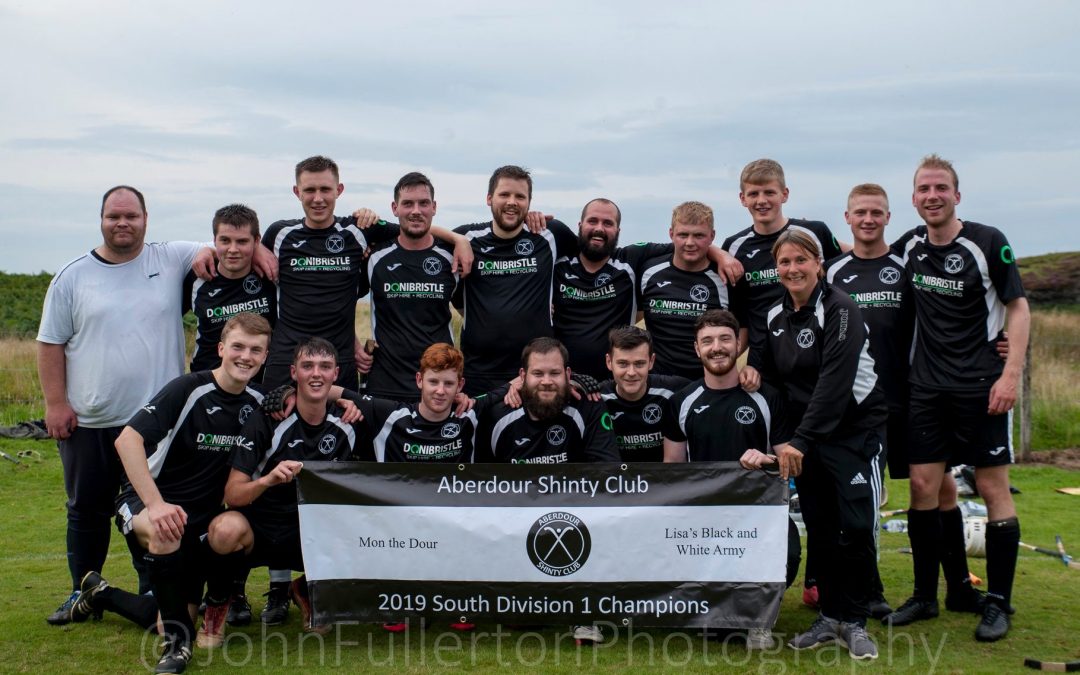 After a long season, Aberdour set off to Oban to play Lochside Rovers looking to pick up the 2 points that would seal the South Division 1 title. Despite a 10 point advantage, Aberdour knew a defeat would open the door for Lochside who were on an incredible 14 game winning streak in all competitions and had 4 games in hand. This fixture was hotly anticipated from the moment the fixtures were released; an end of season clash that may well prove to be a title decider for the two best teams in the league. So it was to be. History was not on Aberdour’s side as they had never before won at Ganavan, athough they had beat Lochside at Mossfield 2 years ago. Despite the poor record at Ganavan, Aberdour were quietly confident that they could get the job done. Also confident were the large number of travelling supporters hoping to see history made.

Aberdour went into the game with a full squad available with the exception of captain Cammy McCue who was missing due to suspension. Manager Lisa MacColl kept more or less the same starting 12 that had served her so well throughout the season. Cammy’s suspension meant that David Mackenzie stepped in at half back with Jack Mitchell moving in to wing centre. Lochside Rovers on the other hand were missing Craig Easton and Blair MacFarlane who were needed for the first team’s game in Caberfeidh.

With the stage set, referee Des McNulty got the game underway. It was a nervy start from Aberdour; poor hitting from defence and midfield meant that the first 15 minutes were played almost entirely in their own half. Lochside weren’t able to capitalise however and were denied by some last ditch defending, particularly from young Iain Fullerton. After the nerves had settled, the game became more of an even contest. Better hitting from half back and the midfield line led to the creation of some half chances for the Dour forwards. David McDougall controlled the ball superbly from John Martin’s free hit only for his subsequent effort to take a deflection and go out for a corner. The best chance of the half fell to Alec MItchell shortly before half time who found himself 8 yards out after wriggling through several defenders. A lack of composure led to some fresh air swings before he was eventually crowded out.

Lochside on the other hand were finding it increasingly difficult to fashion any clear cut chances. Frustration was creeping in to a side which had been so free scoring up to this point in the season. This frustration led to some indiscipline and a couple of unnecessary yellow cards towards the end of the first half which ended 0-0.

Indiscipline was something that Aberdour had struggled with this season and this is what the half time team chat focused on. Dour knew that Lochside would come out swinging and that they couldn’t afford to retaliate, especially with an assertive referee like Des McNulty in charge.

However, indiscipline was to be Lochside’s undoing. Early in the second half there was an off the ball altercation which left Aberdour’s Ruairidh Reid on the floor. After consultation with the goal judge, McNulty produced a second yellow card for the Lochside fullback to reduce them to 11 men for the remaining 40 minutes.

Angus Thorburn wasted no time in putting that one man advantage to good use. A ball from out wide found its way through the Lochside defenders and to the feet of Angus who drilled it hard past the goalkeeper’s left.

It was an uphill battle for Lochside from that point on. Aberdour played the extra man well sitting David Mackenzie in between the defence and midfield to cut out any loose balls. Despite the man advantage, they struggled to create good goal scoring opportunities. McDougall had a couple of half chances and Ruairidh Reid was fouled cynically several times as he tried to dribble towards goal. With 15 minutes to go, manager MacColl made a big call in bringing on Tom Bowerman for Ruairidh Reid as she pushed for a second goal. Previously the first team goalkeeper, Bowerman has made the transition to playing outfield with the second team this year.

The substitution worked wonders and within minutes Jack Mitchell found himself with a yard of space to unleash a low shot towards goal. The Lochside keeper couldn’t get his feet to it quickly enough and the goal was met with thunderous cheers from the travelling support. It looked like Aberdour were cruising to a league triumph with a 2 goal and 1 man advantage.

Lochside weren’t about to throw the towel in though. From the restart they quickly broke up field and got a shot away from a tight angle. Keeper Craig Callachan was alert to get his body in the way and turn it around the post for a corner. It would have been a nervy finish for Aberdour had this gone in with 5 minutes plus added time still to play.

Tom Bowerman had other ideas though and put the game to bed with the last hit of the game. After being played through by Thorburn, he rounded the keeper and stroked the ball into an empty net to seal the match and Aberdour’s first major piece of silverware. A fitting end to the game for one of the first team’s longest serving players.

The referee blew the final whistle almost straight from the restart to begin the Aberdour celebrations. It was double delight for Lisa MacColl who was also celebrating her 40th birthday and received the present she had wanted the most; a first win at Ganavan and the South Division 1 title. The celebrations continued on to the Woodside Hotel who we thank again for their post game hospitality this season. We would also like to thank all the other club sponsors for the support we have received this year.

Commiserations to Lochside who have otherwise enjoyed a successful season by winning both the Sutherland and Bullough cups.

The first team will be presented with the trophy after their last game of the season in Ballachulish on 21st September. They now have to wait for the completion of North Division 1 to find out if they will be involved in a play off to gain promotion to the National Division. Should current leaders Glengarry win that league then a play off will be required. Otherwise Aberdour will gain automatic promotion.