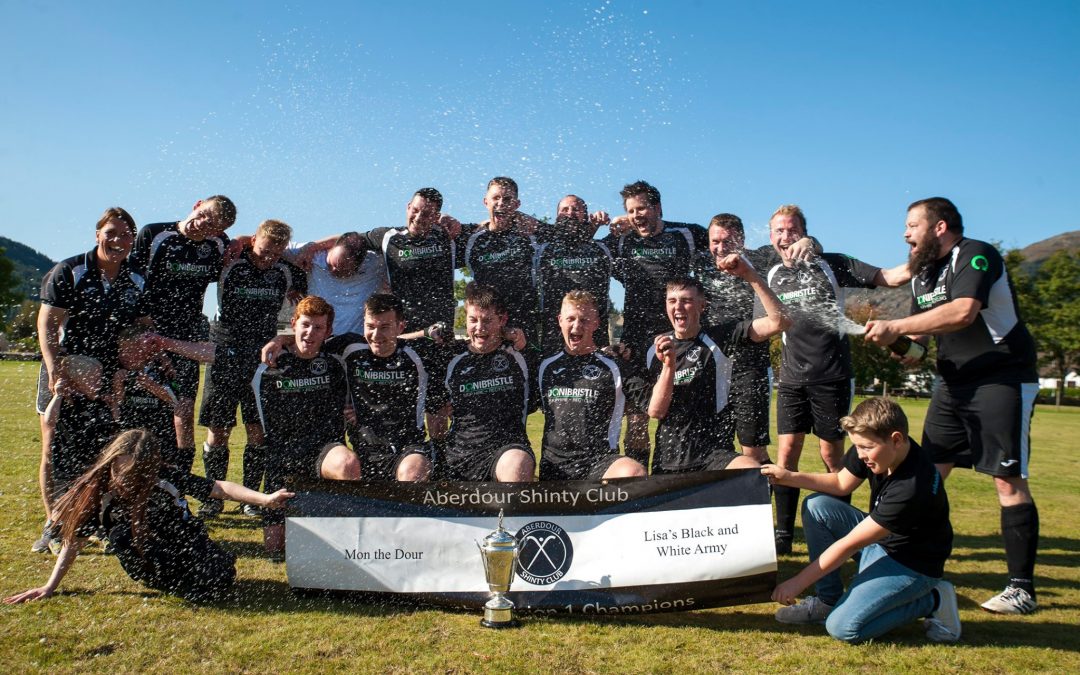 Aberdour took the very scenic road to Ballachulish on a beautifully sunny day to round off their season. Having wrapped up the league last time out, Dour travelled with a large support to see the trophy presentation which was to take place after the match.

Regardless of the result, it was a day to celebrate for Aberdour. The Mitchell brothers combined to get the party started early on. Jack Mitchell forced the ball over the line on 6 minutes before brother Alec rifled home from distance on 19 minutes. Dour were in control and showing why they were champions elect.

Ballachulish weren’t about to lie down however and Lorne Brown pulled a goal back on 25 minutes.  Dour shuffled the pack to try and stem the tide; Tom Bowerman coming on for Ruairidh Reid and David Mackenzie moving to half back. The changes gave instant results with Tom Bowerman scoring with one of his first touches to restore Dour’s two goal advantage.

Ballachulish came out fighting in the 2nd half and were definitely the more physical team. Dour were denied at least one clear cut penalty and left with no serious injuries after a couple of a controversial challenges which were not picked up by the referee. Perhaps some players already had one eye on the trophy and Ballachulish were there to punish the drop in concentration levels. Dougie Rankin made it 3-2 on 51 minutes and then Dan MacLean drew Balla’ level on 77 minutes with a quickly taken free-hit.

It looked like Ballachulish were going to spoil the party but the league’s top scorer had other ideas. After having a penalty saved earlier in the half David MacDougall wasn’t going to let another chance go to waste. On 81 minutes the ball was slipped his way and he fired home the winner for his 18th league goal of the season.

After the match Aberdour were presented with the Mowi South Division 1 trophy and medals by Camanachd Association Director Wendy Chamberlain. Thanks to Ballachulish for the post game hospitality and also to the Woodside Hotel for allowing the celebrations to go on late into the night.

Player of the match goes to everyone who has turned out for the first team this season. The league title was the culmination of a huge amount of effort from a large number of people.