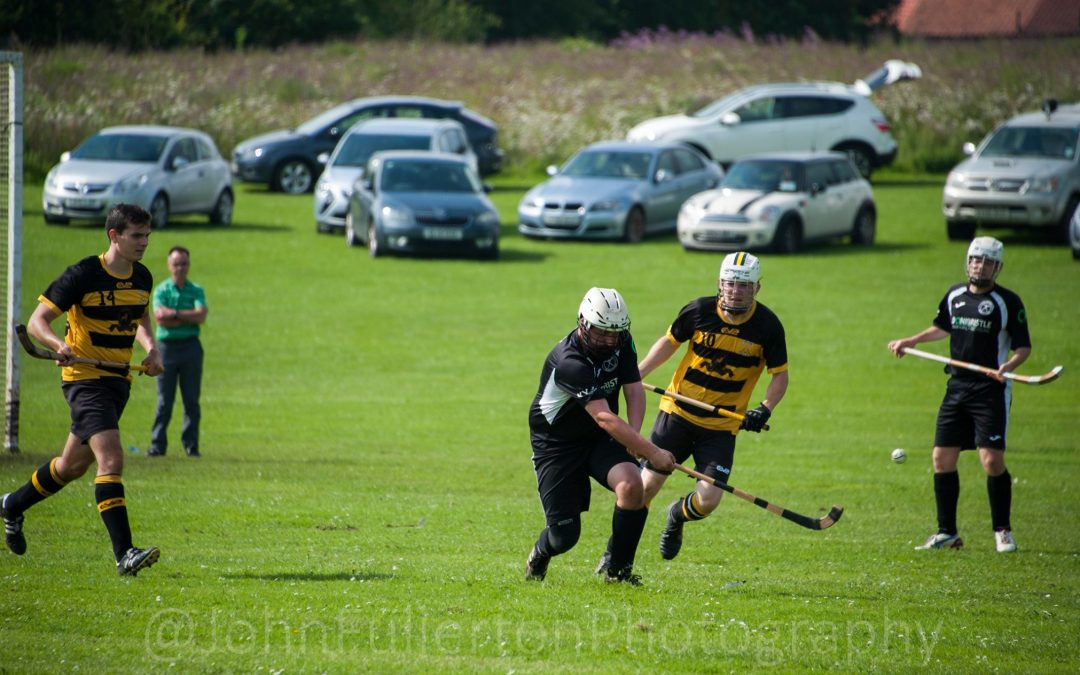 Aberdour 1st’s welcomed Col Glen to sunny Silversands for their final home game of the season. Dour were bolstered by the return of Alec Mitchell from suspension and Ruairidh Reid from injury. A win was essential to retain hopes of a league title with second placed Lochside Rovers keeping up the pressure with another comfortable win in their earlier game. The Dour lads knew from past games that Col Glen would prove no push over and that they would be in for a battle.

The game started with Col Glen straight out the traps and creating some early chances. The reliable Dour midfield were struggling to make an impact on the game and the ball was seldom past the halfway line for the first 15 minutes. An early shot on the Aberdour goal was well saved by keeper Craig Callachan and this was to be the only time he was called into action for the remainder of the game. Against the run of play Dour won a free hit around the Col Glen goal. Angus Thorburn found David McDougall with a nice slip who struck a powerful drive into the back of the net. Despite the setback, Col Glen continued to test the Dour defence who were holding strong under constant pressure. Panda Fraser in particular was putting in an incredible shift. Between him and Iain Fullerton they saw off most attacks with Sam Evans there to sweep up any loose balls that ran through.

The forward line showed lots of promise when the ball did find its way up to them. They looked fluid with incisive passing creating many opportunities but were just not testing the keeper enough. That was until the 28th minute when David Mcdougall found himself free around 25 yards out. After turning his man inside out in trademark fashion he fired a shot that found its way past the Col Glen keeper. Dour took their 2-0 lead into half time but could consider themselves fortunate to be in that position.

Aberdour went out in the second half and began to take charge of the game; David, John and Craig now taking control of the centre line. The game would change 10 minutes into the 2nd half after a stramash between captain Cammy McCue and his man. The referee showed Cammy a red card for his involvement to reduce Aberdour to 11 men for the remaining half hour. A disappointing end to the season for Cammy who will now miss the last two games through suspension.

In the already warm conditions this was to prove a test for the remaining 11 men. But the lads stepped up to the challenge. David Mackenzie and David McDougall moving back to help out while Angus, Reid and Alec remained up front. Against a strong Col Glen side it was going to be tough. In the end, Dour comfortably held on to their 2 goal advantage, arguably looking the more dangerous team even with the one man deficit.

The final whistle was a welcome relief to the many supporters who came down to watch the last game of the season. The support is a big help to the players and we hope to see lots of you back next season.

Player of the match goes jointly to Panda Fraser sponsored by Scotland TranServ and David Mcdougall sponsored by BP St David’s Bay for their instrumental roles in defence and up front/midfield.

The result today ensures that the league will go down to the final day. The 1st’s travel to Ballachulish next week before a crunch match against Lochside Rovers in two weeks. Regardless of other results, a win against Lochside will clinch the title while a few other permutations will also be good enough to take top spot.